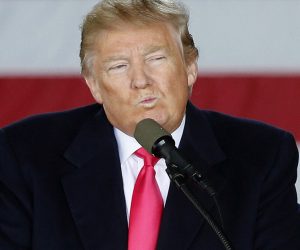 The War on Workers Report
By George Faraday

On Monday President Trump will be back in Cleveland, Ohio — the site of his endorsement as GOP candidate for president in 2016 — to address one of his last MAGA rallies before the election.  Let’s take some guesses as to what he will and won’t be saying in Cleveland about the economy.

Doubtless he’ll mention the latest drop in unemployment and the last two quarters’ GDP figures.  And doubtless he’ll tell the crowd that the NAFTA renegotiations with Mexico and Canada have resulted in a  “wonderful new trade deal … the most important trade deal we’ve ever made, by far”.

Here are 3 things that I doubt he’ll be speaking about:

#1:  Real hourly wage rates are flat, even though unemployment is near record lows and productivity and corporate earnings are up.  If wages aren’t budging at a time when all the economics text books agree they should be shooting up, then the Trump economy is never going to deliver for American workers, however well it treats the 1%.

For ordinary Americans, low unemployment combined with wage stagnation is a crisis, not a triumph.

#2:  Even though Trump promised to stop corporate offshoring of American jobs on “day one” of his Presidency, the number of jobs outsourced to foreign countries since his election just hit 166,433.  Almost 9,000 of those job losses came from Ohio, including 1,500 from GM’s Lordstown Chevy plant, 40-minutes drive from Cleveland.

Like many of the other major offshoring corporations, GM is a major beneficiary of federal contracts — pulling in almost 700 million dollars under Trump. The same goes for other companies that have offshored jobs from Ohio since Trump’s election, including United Technologies, Philips, and Siemens, which together have received over 8 billion dollars from this administration.

#3: Since the 1930s, most federal contracts have been subject to “Buy American” rules to ensure that federal tax dollars are used to create jobs in America.  But the “Government Procurement” provisions of NAFTA exempted Mexico and Canada firms from this rule, so that this administration, alone, has given almost 10 billion taxpayer dollars to Mexican and Canadian firms.

During the NAFTA talks this summer, the Trump administration quietly dropped its initial demand to reinstate Buy American rules, leaving the new NAFTA’s rules unchanged. This seems like a strange omission for a self-proclaimed nationalist, and a dangerous one since the U.S. government spends over $500 billion on goods and services each year.

These three items are all symptoms of an economy overseen by a president who takes good care of corporate interests, but fails to deliver on his promises to American workers.