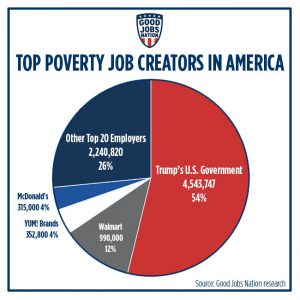 In September 2016, then-presidential candidate Donald Trump outlined his plan for America’s economy. He said: “Every policy decision we make must pass a simple test: Does it create more jobs and better wages for Americans?” Instead, as this report shows, President Trump’s government directly funds more than 4.5 million jobs that pay less than $15 per hour. 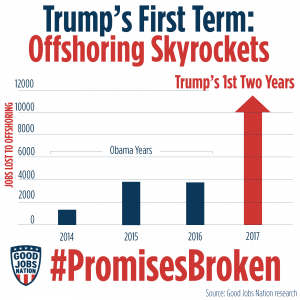 The Offshoring of American Jobs Continues

On the campaign trail Donald Trump proclaimed that he was going to stop offshoring on “day one” of his presidency.1 It’s been 18 months since he took office, and as this report shows, what he called “the greatest jobs theft in the history of our world” continues unabated. Federally-funded government contractors, major corporations that rake in billions in taxpayer dollars each year, are outsourcing jobs at nearly the fastest rate on record, according to our research.