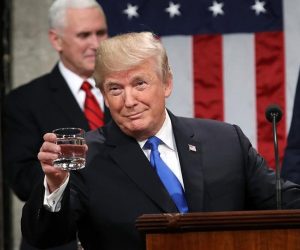 As President Trump prepares to deliver his State of the Union address, Good Jobs Nation decided to crunch the numbers to answer a simple question:  Has Trump fulfilled his signature campaign promise to “punish” corporate offshorers and “bring back jobs”?

Based on our analysis of the number of American jobs sent abroad by major corporations and federal government contractors, the answer is “NO.”

According to the U.S. Department of Labor, 185,000 American workers have lost their jobs to offshoring during Trump’s presidency. Significantly, federal contractors have shipped 15,000 jobs overseas.

Instead of punishing these companies, our research shows that the Trump administration has rewarded them – including many iconic American brands – with $115 billion in taxpayer-funded contracts.

Here are the “Top Ten Offshorers” bankrolled by our tax dollars:

Overall, the top 100 federal contractors have offshored another 1,800 jobs since we released our Promises Broken report on offshoring last August.

Donald Trump promised to stop offshoring on “Day One” of his presidency.  Two years into his term, the numbers show he’s failed to deliver for America’s workers.