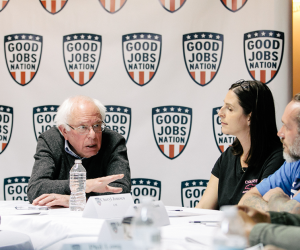 BLOOMINGTON, Indiana  – In a roundtable discussion hosted by Good Jobs Nation, Midwestern workers who lost their jobs to outsourcing by federal contractors sat down with Senator Bernie Sanders (I-VT) today to talk about how President Trump’s broken promises have impacted their lives and their communities.

President Donald Trump promised to stop offshoring on “day one” of his presidency. Instead, offshoring by federal contractors is at a 10-year high — and Trump has rewarded companies that offshore jobs with $50 billion in new contracts, according to a report by Good Jobs Nation. Workers from across the Midwest who had good, union jobs at companies such as Honeywell, General Motors, United Technologies Corporation (UTC), Rexnord and AT&T, are living the impacts of Trump’s broken promises.

“I’m barely scraping by. My unemployment has run out and I’ve gone through most of my savings – I’m now living off my credit cards. My only options outside of GM are minimum wage jobs or waitressing. Neither of those options will give my daughter the future she deserves,” said Cheryl Jonesco, who was laid off from her job at General Motors in Lordstown, Ohio. “We need help now. We need our elected officials to go to bat for us. We need GM to stay in our community. Our future depends on it.”

From Labor Day to Election Day, the Good Jobs Nation “Promises Broken Pickup Truck Tour” is traveling to battleground states to rally with workers who have been laid off, or are at immediate risk of being laid off, by top federal contractors.  Many of these workers supported Trump’s presidential bid because they believed he would save their jobs.

“I worked at UTC’s plant in Huntington, Indiana for 31 years. I loved my job and I did it well. I was a team player. Then, one day, they pulled us into the cafeteria and told us our plant was closing. Our jobs were going to Mexico,” said Susan Cropper, who voted for Trump in 2016 because she thought he would save her job. “All those years of dedication went down the tube. I’m 57 years old. It’s hard to find a new job at my age.  I thought because I worked hard and followed the rules, I would have what I need to retire.”

Since Trump was elected, more than 160,000 American jobs have been sent overseas — including more than 13,000 by federal contractors.  As CEO of America, Inc., President Trump could sign an executive order that tells companies that do business with the federal government that they must treat workers fairly and they can’t offshore jobs.

“It is unacceptable that President Trump continues to give our tax dollars to companies that ship your good union jobs overseas. I know how hard it is for you to tell your stories and I commend your courage. You must keep fighting to hold Trump and the corporate class accountable to America’s workers,” said Sen. Bernie Sanders.

Honeywell, a major defense contractor, recently announced that they are cutting off healthcare benefits to 4,700 retirees and shipping jobs at their South Bend, Indiana plant to Turkey.

“President Trump and Republicans in Congress could tell Honeywell if they want to keep those record profits, if they want to keep those lucrative contracts, they have to keep their promises to workers like me,” said Larry Alexander, who retired after building brake systems for U.S. military fighter jets at the Honeywell plant in South Bend, Indiana for 37 years. “We’ve been following President Trump around the Midwest to deliver a simple message: Companies with huge federal contracts should not be stealing retiree health care and shipping good union jobs abroad.”

AT&T, another major federal contractor, is making record profits due to Trump’s tax bill. However, the company has continued to offshore thousands of good, union jobs at call centers around the country.

“I know I’ll never be able to find a job that pays as well as my job at AT&T. I don’t know how I’m ever going to retire,” said Dena Warren, who lost her job at an AT&T call center in Springfield, Illinois. “It doesn’t have to be this way. AT&T is a profitable company. They don’t have to treat their workers as if we’re expendable. We need a government that holds companies like AT&T accountable. We need good jobs now.”

“Right now, President Trump is out campaigning using the slogan ‘Promises Made, Promises Kept’ and claiming that ‘jobs are pouring back’ into America.   The goal of our tour is to show that the president’s rhetoric doesn’t match reality when it comes to saving American jobs,” said Joseph Geevarghese, executive director of Good Jobs Nation.