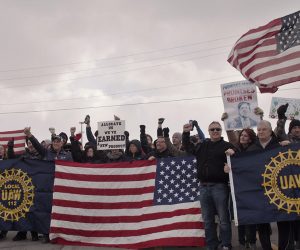 LORDSTOWN, Ohio – Workers at the General Motors plant in Lordstown clocked out for the last time on Wednesday and took to the streets to demand that 2020 presidential candidates visit Lordstown and provide workers with a plan to save their factory.

More than 5,000 GM workers have lost their jobs in Lordstown since President Donald Trump was inaugurated, and thousands more in the surrounding community have been impacted.

“President Trump said recently: ‘We’re going to be the car capital of the world, it won’t be long.’ Yet he hasn’t bothered to lift a finger as General Motors sends thousands of our jobs overseas and devastates our local community.  Instead, he’s rewarded them with $782 million in contracts with the federal government,” said Chuckie Denison, a laid-off GM worker in Lordstown. “Trump lied to us. We’re not going to let other politicians do the same thing. That’s why we are calling on the 2020 candidates to come to Lordstown and tell us what they are going to do to stand up to GM and keep good jobs in the USA.”

Good Jobs Nation has been circulating a petition, calling on the 2020 presidential candidates to visit Lordstown and pledge to stand with GM workers. New research from Good Jobs Nation shows that 185,000 jobs have been lost to foreign competition on Trump’s watch, and that his administration has awarded more than $115 billion in federal contracts to companies such as GM that continue to offshore jobs.