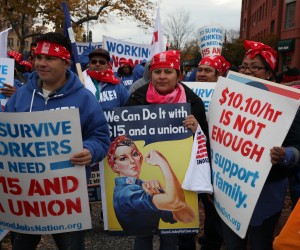 By THE EDITORIAL BOARD

Nationwide protests on Wednesday by tens of thousands of low-wage workers were planned long before Hillary Rodham Clinton announced her candidacy for president on Sunday. But the demonstrations — part of the Fight for $15 campaign that began with fast-food workers in 2012 and now includes retail employees, child-care workers, home-care aides, airport workers and adjunct professors, among others — have proved well timed.

Ms. Clinton has offered herself as a champion of “everyday Americans,” saying that “the deck is still stacked in favor of those at the top.” That view dovetails with the everyday reality of the protesters, who by and large work at big and profitable companies with highly-compensated executives, and yet do not make enough to live on.

The Republicans, declared and undeclared, have so far mostly skirted the issue, and seem largely to believe that income inequality is unrelated to concentrations of wealth at the top of the economic ladder.

No matter where the candidates stand now, however, the reality of grindingly low pay amid great corporate plenty means that all presidential aspirants should be obliged to spell out in detail where they stand on raising the minimum wage, currently $7.25 an hour, as well as their views on related labor issues.

Many Senate Democrats have signaled support for lifting the minimum wage to $12 an hour by 2020. But that is both low and slow. A credible raise must not only improve on today’s inadequate minimum, but restore it to a level that accounts for inflation in wages and prices over recent decades, as well as the growth in labor productivity. Simply raising the hourly minimum in line with wage and price inflation would put it at about $11 today; adjusting it for productivity growth would put it at about $18.

Real leadership will also require going beyond calling for a robust minimum wage. It also means supporting the protesters’ parallel demand for the right to organize without retaliation, which would lay the groundwork for collective bargaining in service industries.

President Obama’s support for unions has been disappointing. He did not keep a 2008 campaign promise to push for legislation to make unionizing easier and has made scant use of his bully pulpit to register protest as unions have come under attack in many states.

And in his executive orders to improve working conditions for employees of federal contractors, he stopped short of requiring that such contractors support collective bargaining.

Defending workers can be politically troublesome, and restacking the deck, as the protesters are demanding, won’t be easy. But it will be easy to tell if the candidates are really trying.