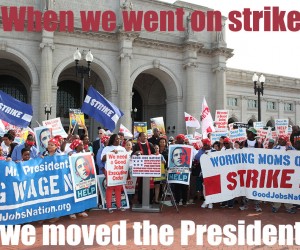 “In the past year-and-a-half, federal contract workers have gone on strike nine times to protest low wages and labor law violations. The latest took place on July 29 when employees at federal worksites at Union Station, the Pentagon, the Smithsonian museums and the National Zoo walked off their jobs in the Washington DC area.” Bloomberg

“They want Mr. Obama to issue a Good Jobs Executive Order.” As outlined in a recent letter to the president from the Congressional Progressive Caucus, the order would ensure that federal contracts go to employers who pay relatively well, support collective bargaining and have clean labor records.” The New York Times

Just days after the latest federal contract worker strike – and on the heels of a Congressional Hearing on Wage Theft – President Obama issued an executive order to address one of the Good Jobs EO policy goals.

“The order will ensure that taxpayers aren’t supporting companies that “discriminate, steal wages or fail to protect the health and safety of their employees, said Wade Henderson, president and chief executive of the Leadership Conference on Civil and Human Rights.” The Los Angeles Times

“Drawing on our recent report Underwriting Good Jobs, we estimate that nearly 7 million workers are gaining new protections against wage theft and other workplace harms from the Fair Pay and Safe Workplaces Executive Order.” Demos

“This executive order builds on the president’s minimum wage executive order and will allow the federal government to lead in the fight for good jobs and hold workplaces accountable to fair standards, said US Rep. Keith Ellison.” Government Executive

“But there is still work to do. As part of their Good Jobs agenda, labor advocates and progressive Democrats also called for executive orders to give priority in federal contracting to employers who offer better pay than their competitors and who support collective bargaining. That is vital to ensuring that federal contracting is not a contest to see who can pay the least, but a rational process both for ensuring good jobs at fair pay and for setting an example for the private sector.” The New York Times Editorial Board