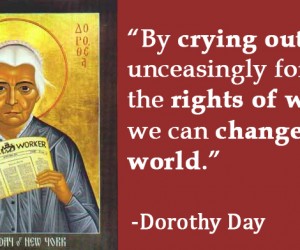 When he invoked Dorothy Day in his speech to Congress, Pope Francis gave hope to thousands of cooks, servers, salespeople and janitors in Washington, D.C. who work for private-sector contractors at federal venues, including the Smithsonian, Union Station, the Pentagon and the Capitol.

The employees, who have been striking periodically since 2013 for higher pay and a union, have argued that the federal government is effectively the nation’s largest low-wage employer because it contracts widely with companies that pay poorly even while profiting greatly.

Before the pope visited, the employees sent a letter to the Vatican asking to meet with him. They got no reply. But when the pope included Dorothy Day as one of four American heroes to be emulated, the workers and the labor organizers at Good Jobs Nation who support them felt they had been heard: For Dorothy Day, the founder of the Catholic Worker Movement, support for fair pay and workers’ rights was central to the fight for social justice.

It is important to remember, however, that the Catholic clergy was not always aligned with Dorothy Day’s advocacy.

Case in point: In the winter of 1949, Francis Spellman, then the Archbishop of New York, broke a strike by 240 Catholic gravediggers at the largest Catholic cemetery in New York City. Dorothy Day and the Catholic Worker newspaper she founded had steadfastly backed the strikers with money, supplies, legal aid and moral and editorial support.

The events are described in detail in a law journal article by David L. Gregory, the Dorothy Day Professor of Law at St. John’s University.

The gravediggers, who were unionized under the United Cemetery Workers of the Congress of Industrial Organizations, had been working six-day, 48-hour weeks for $59.40 a week – which is about $10 an hour in today’s dollars. In December 1948, when it was time to renew their contract, they sought the same weekly pay for a five-day, 40-hour week, plus overtime pay for Saturday, or about $15 an hour in today’s dollars.

The New York Archdiocese rejected the demands on January 4, 1949, four days after the contract had expired, offering instead a 2.6 percent cost-of-living raise.

The gravediggers then voted unanimously to strike and were soon joined by 50 other unionized employees at a Catholic cemetery in Westchester County.

Strikers picketed at the cemetery gates. Unburied coffins were placed in temporary graves under tarpaulins.

The archdiocese initially responded by disparaging the union leaders and threatening to fire striking workers. Several weeks into the strike — with nearly 1,200 coffins unburied — it resorted to strike-breaking by bringing in seminarians to bury the dead. The New York Times reported that the cardinal said that the union was communist-dominated and that the strikes were “unjustified and immoral” and an affront to the “innocent dead and their bereaved families.” He said he was “proud” to be a strikebreaker because the duty to bury the dead outweighed laws against strikebreaking.

Dorothy Day challenged him. In a letter on March 4, 1949, she said the strike was about the workers’ “dignity as men, their dignity as workers, and the right to have a union of their own, and a right to talk over their grievances.” She endorsed a wage high enough to help the gravediggers raise their families and meet “high prices and exorbitant rents.” She asked the cardinal to go to the union leaders, “meet their demands, be their servant as Christ was the servant of his disciples, washing their feet.”

On March 7, 1949, the cardinal rejected a request by wives of the strikers to appoint a priest to mediate the strike. He told the women the strikers could return to work as long as they accepted the increase on offer and left the union.

The next day, the gravediggers sought to placate the archdiocese bydropping their affiliation with the union that the cardinal had linked to communism and joining the generally less militant American Federation of Labor.

The strike was settled on March 11, 1949. The archdiocese had increased its original offer from a nearly 3 percent wage increase to 8 percent. The six-day, 48-hour week was maintained. In today’s dollars, the gravediggers’ new pay was about $13.40 an hour.

An editorial in the Catholic Worker in April 1949 said that from the start, the paper had said “the strike was justified” and, despite the outcome, “we say it still.” It also noted that the strike could have been avoided if the workers had been treated “as human beings and brothers.”

The same could be said of strikers today, including the employees of federal contractors and fast food workers in the Fight for $15, who want decent pay from powerful employers and bargaining power in their dealings with them.

It is right and just for Pope Francis to urge Americans to recognize the greatness of Dorothy Day. By elevating her, he elevates her cause: dignity for working men and working women.