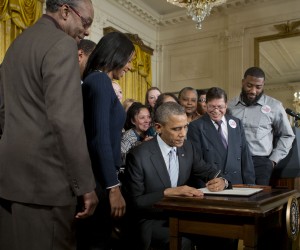 By The New York Times Editorial Board

Half a million low-wage workers will get a raise in April, when Walmart lifts hourly wages at its stores in the United States to at least $9. The raise, announced this week, appears to be an attempt to stem employee turnover and to respond to pressure for higher wages from politicians, labor groups and employees. Walmart also pledged to raise its wage floor in 2016 to $10 an hour.

For low-wage workers, every little bit helps. And raises at Walmart could well lead to raises elsewhere as competitive pressures force Target, Home Depot and other low-wage retailers to follow suit.

Still, raising pay at Walmart to even $10 an hour is only a small improvement. At Walmart, the boost will be greatest for the 6,000 workers — out of a work force of 1.3 million — who currently make the federal minimum wage, $7.25 an hour. For many other workers, the increase will be much less than a dollar an hour.

A hugely profitable corporation like Walmart can readily afford to do better than those measly increases. But it is very unlikely to do that voluntarily, without governmental action.

There is no doubt, for example, that many more workers at Walmart (and elsewhere) would be making the federal minimum wage but for the fact that 29 states and the District of Columbia, as well as some cities, now have minimums above the federal level.

There is also little doubt that Walmart (and other employers) would pay more if low wages were not, in effect, subsidized by taxpayers, who pay for the food stamps and other public assistance that low-wage workers rely on to get by. This argues for improved labor standards that would shift the burden back to employers.

Clearly, the federal minimum wage, unchanged since 2009, needs updating. Overtime-pay standards have not been meaningfully updated since the mid-1970s. Collective bargaining protections also have been serially weakened by legislation in the states and by court rulings.

With the Republican-dominated Congress unlikely to engage in any of those areas, President Obama must continue to move forward by executive action.

His 2014 order to raise the minimum wage for the employees of federal contractors to $10.10 an hour bolstered efforts by labor groups and helped set a new norm that very likely played a role, if indirectly, in Walmart’s decision to give a raise. Mr. Obama should follow up with another to ensure that federal agencies give priority in contracting to employers that offer better pay than competitors and support collective bargaining.

The administration should also take the opportunity to move beyond the wrongheaded notion that a new federal minimum wage of $10.10 would be adequate. By relevant economic benchmarks, the federal minimum wage today should be $11 an hour to $18 an hour. An amount in that range is what policy makers should be fighting for.