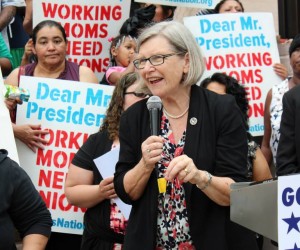 Supporting a living wage is one of the most effective ways people of faith can uphold the dignity of work. NETWORK and Catholic social justice teaching support an economy that puts people, not profit, at the center, where each person can find a job that provides for his or her family.

I was delighted to be invited to the White House when Obama signed his executive action. There, I sat next to a low-wage worker named Robin who was wearing a beautiful blue dress. Robin beamed as she told me that she purchased the dress using her employee discount at the retail store where she worked. Robin also shared that she lived in a homeless shelter because she could not afford a place of her own on how little she earned working full-time. We were there to celebrate the good news of Obama’s action, but the awareness that women like Robin still lived in poverty left me anguished.

My conversation with Robin reminded me that every economic policy decision has moral significance. Too many people like Robin who work in low-wage jobs are robbed of the opportunity to achieve the fullness of their human potential because they cannot simply shelter or feed themselves. This is unjust.

Pope Benedict XVI affirmed the moral dimension of our economic life when he noted that “poverty results from a violation of the dignity of human work . . . because a low value is put on work and the rights that flow from it, especially the right to a just wage and to the personal security of the worker and his or her family.”

Pope Francis has taught us, “Just as the commandment ‘Thou shalt not kill’ sets a clear limit in order to safeguard the value of human life, today we also have to say ‘thou shalt not’ to an economy of exclusion and inequality. Such an economy kills.”

Until the United States enacts a living wage that allows workers to care for themselves and their families, we are complicit in perpetuating the economy of exclusion and inequality.

As the president prepares to leave the Oval Office, we can honor his legacy and ensure that we move forward in creating our vision, shared by Pope Francis, of an economy of inclusion. Not only did Obama raise the minimum wage, he followed up by using executive action to end wage theft and extend paid leave for low-wage federal contract workers.

Given that the U.S. government is America’s leading low-wage job creator — creating more poverty jobs than Wal-Mart and McDonald’s combined — Obama exemplifies how the next president can use his or her executive authority to lift workers out of poverty when Congress fails to act.

By committing to use executive action to help workers in the “Fight for $15 and a union,” the 2016 candidates can honor the full potential of human life and work. Moreover, they can shift our national conversation away from simply adjusting the minimum wage to ensuring that every person enjoys living wages and the right to organize.

Robin and millions of workers like her are counting on our elected leaders to do everything possible to ensure our government acts to create a moral economy in which they enjoy the right to live in dignity and provide for themselves and their families.

[Social Service Sr. Simone Campbell is executive director of NETWORK, a national Catholic social justice lobby, and author of A Nun on the Bus: How All of Us Can Create Hope, Change, and Community.]