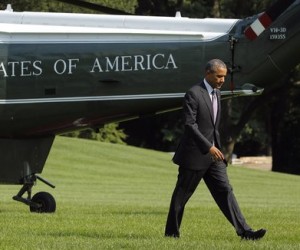 At a planned White House event on the economy this Thursday afternoon, President Obama should use his remarks for more than huffing and puffing about the strong economic growth in the second quarter.

Granted, the estimated 4 percent annual growth from April through June, announced on Wednesday, is the expansion we have all been waiting for after the contraction in the first quarter. But there’s little in the data to suggest that strong growth is sustainable. Instead, it seems likely that the economy will resume overall growth of 2 percent to 2.5 percent, too slow to meaningfully boost employment or wages.

What the president should focus on is what he can do, right now, to counteract the drag on jobs and pay.

On Tuesday, some 200 low wage workers walked off their jobs in federal venues in Washington, D.C. to demonstrate for higher wages and better conditions. It was the ninth such protest in the past two years, involving workers at Union Station, the National Zoo, the Smithsonian Air and Space Museum, Ronald Reagan federal building and the Pentagon.

The workers — who were joined by four Democratic members of Congress — are employees of federal contractors who run food concessions, janitorial businesses and other services at the targeted venues. They want Mr. Obama to issue a “Good Jobs” Executive Order. As outlined in a recent letter to the president from the Congressional Progressive Caucus, the order would ensure that federal contracts go to employers who pay relatively well, support collective bargaining and have clean labor records.

A Good Jobs directive would build on an order issued by Mr. Obama earlier this year, requiring federal contractors to pay their employees at least $10.10 an hour, starting in 2015. The employees who struck this week, and the legislators who support them, have made the sensible argument that without protections against wage theft and other labor violations, workers might never see the $10.10 an hour that has been promised. Besides, a Good Jobs order could boost the prospects of millions of federal contract workers who already earn more than $10.10, but are still scraping by.

Labor advocates believe that Mr. Obama is ready to require that federal contracts go only to companies that have a record of compliance with federal labor law. That would be a step in the right direction, but he needs to go further.

The prolonged weak economy has allowed employers – including federal contractors — to hire workers at low pay and hold on to them without giving raises, even as corporate pay and shareholder returns have grown. A full Good Jobs executive order is the better way for Mr. Obama to take much needed corrective action.