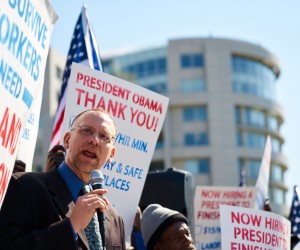 By Jason Kimelman-Block, Director of Bend the Arc Jewish Action

Many Jews are familiar with Maimonides’ teaching that the highest level oftzedakah (charity) is to help a person gain employment so that they can have the dignity of working to support themselves. But what if full-time work paid so little that a person was denied that measure of dignity by continuing to be in need oftzedakah? That is the reality that millions of low-wage workers face in today’s economy.

Jews’ emphasis on the dignity of work and the rights of workers existed long before the creation of labor unions. The Torah itself includes rules governing the fair treatment of workers, recognizing their vulnerability to exploitation.

In recent years, Jewish workers, activists and religious leaders have campaigned side-by-side with workers’ rights advocates in the fight for an increased minimum wage.

On April 14th, the #JewsFor15 campaign stood in solidarity with the tens of thousands of striking low-wage workers around the country who are part of the Fight for $15 movement to call for an increased minimum wage across the country. In addition to joining marches in New York, Denver, Los Angeles, San Francisco, Durham and New Orleans, we joined workers in Washington, D.C. who are organizing under the Good Jobs Nation banner to call on the country’s largest low-wage job creator – the U.S. government – to do better by offering $15 and a union to every federal contract worker.

Each year more than a trillion tax dollars are spent to purchase goods and services from private corporations through federal contracts. These corporations then hire millions of workers to sweep the floors of the Capitol, clean the offices of Cabinet secretaries, serve meals to military generals, and do the numerous other tasks that keep our nation running.

Shockingly, more than a third of these jobs don’t pay a living wage. That means workers who we – the taxpayers – employ work full-time and still live in poverty.

This is shameful. It’s not just an economic crisis; it’s a moral crisis as well. All workers deserve to live with dignity. They should not be forced to rely on public aid and charitable giving to make ends meet. Work should be the foundation to building a full life where participation in a vibrant economy is something a worker can take pride in.

Our government has a responsibility to make sure our workers receive a fair, living wage. If Congress won’t act, our next president must exercise his or her executive powers.

That’s why Bend the Arc Jewish Action has joined with 25 national religious organizations to call on the next president to take Moral Action on the Economy by signing an executive order that raises the minimum wage for federal contract workers to $15 an hour and allows for collective bargaining to ensure that workers’ rights are protected.

As we observe Passover and celebrate our liberation from bondage in Egypt, we also remember this passage from Exodus:

“The Egyptians ruthlessly imposed upon the Israelites the various labors that they made them perform. Ruthlessly they made life bitter for them with harsh labor at mortar and bricks and with all sorts of tasks in the field.” – Exodus 1:13-14

With the stroke of the pen, the next occupant of the Oval Office can honor the spirit of Passover and liberate millions of contract workers from the bondage of poverty and suffering.

Together, let us raise our voices to ensure that the next President respects the dignity of work that federal contract workers perform for us and by doing so, makes their lives more full and gives them the opportunity to build a better future for their children.