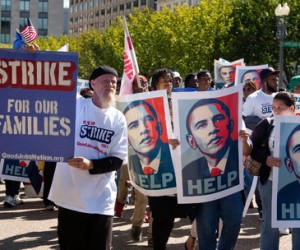 In a speech last July, President Obama vowed that “whatever executive authority I have to help the middle class, I’ll use it.” On Wednesday, an estimated 175 workers who serve food, sell mementos or do maintenance work in federal buildings in Washington D.C. went on strike for the day. Instead of showing up at their jobs, they showed up in front of the White House, where they urged President Obama to live up to his word.

The strikers are not government employees. Rather, they work for private-sector companies that have been awarded government contracts to operate concessions and provide other services at federal venues including Smithsonian museums, the Ronald Reagan federal office building, and Washington’s Union Station.

Those contracts, worth some $466 billion last year, are often lucrative – for the contractors, that is, but not for many of the workers they hire. In one study, the National Employment Law Project interviewed 500 federal contract employees who serve food, sell merchandise, sew military uniforms and drive trucks, finding that more than 70 percent of them made less than $10 an hour. A separate study by Demos, a progressive think tank, found that 560,000 employees of federal contractors make less than $12 an hour.

The strikers are calling on Mr. Obama to issue an executive order to ensure that government contracts are awarded only to employers that pay living wages. In support of their cause, fifteen senators have sent a letter to Mr. Obama, urging him to use his executive authority to require federal agencies to give preferential treatment to companies vying for contracts that pay at least $10.10 an hour and provide benefits (still low, but better than what many workers receive now). Fifty congressional Democrats sent a similar letter.

The next move is the administration’s. In early 2010, White House officials and labor advocates told The Times that the administration was planning to change the way it awarded federal contracts to give an edge to companies that offer better pay and benefits. At the time, it was estimated that 400,000 federal contract employees earned less than $22,000 a year — then, the federal poverty line for a family of four. The plan was specifically seen as a way to lift more families into the middle class.

But business groups and Republican lawmakers objected, and the plan went nowhere.

Will it be revived? Other presidents have used executive orders to upgrade labor standards for employees of federal contractors, including President Kennedy, who required federal contractors to have companywide equal employment opportunity plans, and President Johnson, who prohibited racial discrimination and other bias in hiring by federal contractors. If Mr. Obama is not inclined to use his executive authority to combat low wages in federal contracting, he at least owes the strikers, other low wage workers, and the dozens of lawmakers who have come out in support of their demands, an explanation for his inaction.

Federal contracts dole out taxpayer dollars, and taxpayer dollars should not be used to foster an economy that is built on low wages for workers, even as executive pay and shareholder returns soar. Nor should federal contractors be allowed to pay wages that are so low as to ensure that typical workers qualify for Medicaid, food stamps and other public assistance, in effect, forcing taxpayers to subsidize ostensibly private-sector businesses.

Low wage work is not an inevitable result of impersonal market forces. Policy matters, and policies today – including those that govern the awarding of federal contracts – are promoting income inequality rather than broad prosperity.