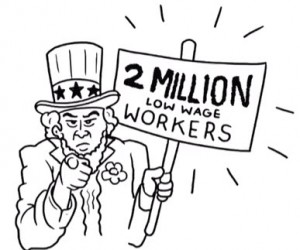 By: The New York Times Editorial Board

In 1965, in a nation torn by racial strife, President Johnson signed an executive order mandating nondiscrimination in employment by government contractors. Now, as President Obama has observed, the nation is divided by a different threat: widening income inequality. He could respond much as Mr. Johnson did — with an executive order aimed, this time, at raising the pay of millions of poorly paid employees of government contractors.

Recent studies have shown how hundreds of billions of dollars in federal contracts, grants, loans, concessions and property leases currently flow to companies that pay low wages and provide few if any benefits, even as executive pay among federal contractors has risen. In effect, tax dollars are being used to fuel the low-wage economy and, in the process, worsen inequality.

This research has been underscored by a recent complaint filed with the Labor Department by Good Jobs Nation, a group representing low-wage workers employed under federal concession agreements. The complaint alleges that food franchises operating at federal buildings in the District of Columbia have ignored minimum-wage and overtime laws. The group has also organized walkouts by low-wage workers of vendors licensed to operate at Smithsonian museums, actions that have dovetailed with recent walkouts by fast-food workers around the nation.

Many laws and executive actions, mostly from the 1930s and 1960s, require fair pay for employees of federal contractors. But over time, those protections have been eroded by special-interest exemptions, complex contracting processes and lax enforcement. A new executive order could ensure that the awarding of contracts is based on the quality of jobs created, challenging the notion that the best contractor is the one with the lowest labor costs.

Mr. Obama also could tell federal agencies to conduct reviews of contracts to see if the work should be done in-house. There is compelling evidence that using private-sector contractors is often costlier than using government employees, even when contractors pay workers little.

Nearly 50 years after one executive order helped to end discrimination in government contracting, another one is needed to help ensure fair pay in that same sector.