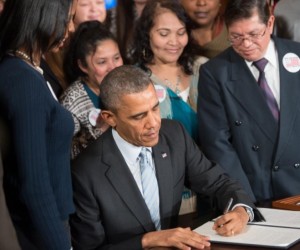 Making good on a promise from his recent State of the Union address, President Obama signed an executive order on Wednesday to ensure that employees of federal contractors are paid at least $10.10 an hour starting in 2015.

The order, which applies to new and renewed contracts, could lift the wages of up to half a million people.

That is a mere sliver of the estimated 27.8 million people who would see a raise if the federal minimum wage were increased from its current hourly level of $7.25 to 10.10 by 2016, as proposed by President Obama and congressional Democrats.

But the hope is that the executive order will motivate and pressure congressional Republicans to support that broader increase. Mr. Obama can raise the pay of federal-contract employees using his authority over government procurement, but only Congress can raise the federal minimum wage.

In the meantime, there is more that Mr. Obama can and should do to help raise wages.

He could, for example, require preferential treatment in the federal bidding process for employers who offer better pay and benefits than their competitors. He could use executive orders to improve compliance among contractors with wage and safety standards, as was recently recommended in a congressional report on contractors’ widespread and repeat violations of labor law. He could require companies that seek to do business with the federal government to have a record of fostering and maintaining labor peace by, say, collectively bargaining over wages and, in that way, avoiding strikes, turnover and other disruptions that harm both workers and the public that relies on them.

There is also room to expand on the new executive order. The requirement to pay at least $10.10 an hour applies only to companies with federal contracts to provide services, including concessions, health care and construction. It should be expanded to cover businesses and workers that provide the government with goods, including uniforms, food and other supplies.

Most important, neither the president nor congressional Democrats should view the executive order’s $10.10 an hour as the most they could possibly ask for in setting a new federal minimum wage. By many measures, including purchasing power and productivity growth, $10.10 is too modest. And the longer it takes to get a raise out of Congress, the higher the new minimum should be.

With the executive order, Mr. Obama is leading Congress and the private sector where the public needs them to go. But there is still a long way to go.