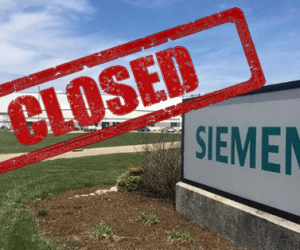 On December 21, 2018, Germany-based conglomerate Siemens will close its historic Murray turbine plant in Burlington Iowa with the loss of 125 jobs.

The Burlington factory, which Siemens acquired from Dresser-Rand in 2014, has been in operation for nearly 150 years, making it the oldest manufacturing plant in business west of the Mississippi.

These job losses are just some of the over 1,700 that Siemens has offshored to foreign countries since Trump’s election, according to the Department of Labor.

For instance, in January 2018, Siemens laid off 200 workers from its wind turbine plant in neighboring Fort Madison.

And in February 2018, Siemens announced that it would be closing another former Dresser-Rand plant in Wellsville, New York in 2020.  Like the Burlington plant, Wellsville’s has been a key part of its city’s economy since it opened back in 1916.

According to Machinists Union official Jimmy Conigliaro, these closures exemplify Siemens’ practice of buying up community-based, independent companies, cherry-picking their product lines, and then selling off their assets.

Siemens gets away with this while raking in billions of dollars in government subsidies and contracts. Over the past 20 years the company has received $1.5 billion in public subsidies and loans. And, according to our analysis of government data, President Trump has given it $765 million in federal contracts.

During the primaries Trump campaigned in Burlington with the declaration that “I will be the greatest jobs president that God has ever created.”

He picked a good place to make this promise. Des Moines County, the home of Burlington, is one of Iowa’s 31 “pivot” counties– the highest number of any state – that swung from Obama to Trump in 2016. Des Moines moved to Trump by 25 points.

But Trump also picked a bad place to break his promises. In the midterms the Democratic vote in Des Moines County was up 14% compared to Trump’s performance in 2016. And neighboring Lee County, home to Siemens’ imperiled Fort Madison plant, which swung 32 percent to Trump in 2016, moved back to the Democrats by 20 percent.

These are the counties where Election 2020 will be decided. And, right now, it seems like their voters know who’s been naughty and who’s going to face some consequences.