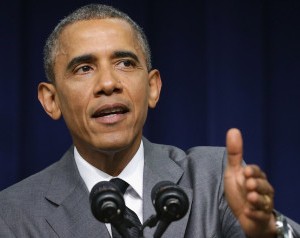 President Obama has given labor advocates and progressive Democrats part of what they have been asking for in their drive to improve pay and working conditions for employees or federal contractors.

The executive order signed today requires companies that apply for new federal contracts of at least $500,000 to disclose their compliance — or lack thereof — with labor laws on wages and hours, health and safety, collective bargaining, family and medical leave and civil rights. It establishes procedures and benchmarks for evaluating a potential contractor’s labor record and instructs federal agencies to take those records into account when awarding contracts. According to the White House fact sheet, “The Executive Order will ensure that the worst actors, who repeatedly violate the rights of their workers and put them in danger, don’t get contracts and thus can’t delay important projects and waste taxpayer money.”

The order is effective in 2016, but is likely to prod bad actors to clean up their acts starting now. That’s because, under the order, federal agencies will evaluate a potential contractor’s labor record going back three years.

Another commendable provision in the order bars companies with federal contracts of $1 million or more from requiring employees to use mandatory arbitration in cases involving sex discrimination or sexual misconduct.

But there is still work to do. As part of their Good Jobs agenda, labor advocates and progressive Democrats also called for executive orders to give priority in federal contracting to employers who offer better pay than their competitors and who support collective bargaining. That is vital to ensuring that federal contracting is not a contest to see who can pay the least, but a rational process both for ensuring good jobs at fair pay and for setting an example for the private sector.