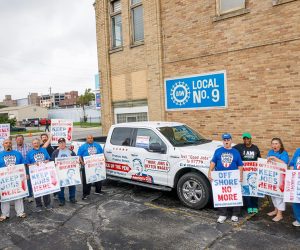 Good Jobs Nation will be there with workers from across the Midwest who have lost their jobs because of outsourcing decisions by federal contractors like General Motors, United Technologies, and Honeywell to call on Trump to keep the promises to American workers that won him the election in 2016.

Trump was in District 12 just three months ago, to tout the reopening of a U.S. Steel plant in Granite City. Although in typical Trump fashion, the President claimed that the U.S. Steel was opening seven new plants, when in fact it was only firing up two old furnaces, the 800 jobs at Granite City were welcome news for working families in Southern Illinois.

But the President had nothing to say about the massive loss of good jobs to offshoring under his watch – something he promised to stop on “day one” of his administration. In fact, Illinois alone has lost over eight times as many jobs from offshoring since his election as the number of steel jobs created at Granite City. Worse still, 2,088 of these jobs were axed by corporations awarded contracts by the Trump White House.

For instance Siemens Industry closed to its West Chicago facility in April, shifting 317 jobs to Mexico. Siemens has made $760 million in federal contracts since Trump took office.

And Honeywell, which has raked in almost $10 billion in contracts under Trump, is closing its uranium processing plant in Metropolis, with the loss of 342 jobs to Canada. During Trump’s presidency Honeywell profits have risen $1.5 billion and its revenues are up three billion.  CEO Darius Adamczyk made almost $17 million last year — 333 times more than his median employee.

Other federal contractors offshoring from Illinois include Dentsply (145 jobs from Des Plaines), BP (40 jobs from Naperville), Capgemini (85 jobs from Chicago), and John Deere (333 jobs from Moline).

Nationally, America has lost over 164,000 jobs to trade and offshoring since Trump’s election, and the Trump administration has awarded over $50 billion in contracts to the corporations responsible.

With less than two weeks left until the midterms, will the Trump take action?