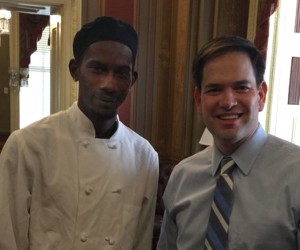 The pope has denounced the “structurally perverse” global economic system that exploits the poor. His message is about workers like me. I’m the chef at the Senate dining room inside the US Capitol. I work for a UK-based multinational conglomerate that makes billions in profit yet leaves workers around the globe destitute.

I prepare breakfast and lunch for the US senators, several of whom are running to be the next president of the United States. When the pope comes to deliver his message to Congress on 24 September, I hope his words encourage the senators to open their hearts to the suffering of the working poor who serve them every day.

In recent months, my co-workers and I have walked off our jobs several times to protest poverty pay and shared our stories of struggle in these pages. Despite our strikes and our heart-breaking stories, the Senate has not taken any action to help us win living wages and a union. Even worse, the Senate has allowed our company to threaten and try to intimidate us into silence.

Now, we are appealing to a higher power. We have written a letter to Pope Francisasking him to grant us an audience when he comes to address a joint session of Congress.

Many of us are Catholic and find comfort in the pope’s message that the working poor deserve living wages and the freedom to organize unions. We want Pope Francis to know that we don’t want to rely on public aid programs like food stamps or work demeaning second jobs to survive. We just want to earn a fair day’s pay for a fair day’s work and win a voice on the job.

We believe that if the pope meets with us and understands our plight, he will urge senators to act to restore dignity and justice to our lives.

Most of the senators don’t even realize that the people preparing their meals can’t afford to make ends meet. Many senators are multi-millionaires who not only enjoy fancy meals but also get chauffeured around in black SUVs surrounded by aides who are ready to meet their every need. In contrast, the pope– who drives around Rome in a Ford Focus and lives in a simple 1 bedroom apartment – lives a lifestyle that shows he understands the lives and struggles of workers like me.

I’ve worked as a Senate chef for 5 years, but I only make $13 dollars an hour. I’m a single father and it’s hard to support my son on a poverty wage. The cost of living in Washington is so expensive that I recently ended up homeless. I lived in an abandoned house for nearly two months. That’s how long it took me to save up enough money to rent a bedroom in an apartment. I often had to skip meals to save money.

Perhaps the lavish lifestyle of our politicians makes it hard for them to understand the challenges of the working poor. The senators I cook for select their dishes and wine pairings from a black leather bound menu, with the seal of the Senate embossed in gold on the cover. Senator Marco Rubio is a fan of the “Poached Salmon Nicoise Salad” with haricot verts, capers, egg, tomato, potato, and thyme vinaigrette ($19 dollars). Senator Lindsey Graham likes to order the “Stacked Cesar Salad” with grilled chicken, baby romaine lettuce and petit romaine hearts ($18 dollars). I’d have to work about two hours to any of these dishes, which I cooked myself.

When the pope comes to Congress, I hope he tells the senators that the workers who serve them are their equals in the eyes of God and that we should be able to afford food and shelter just as politicians are able to do. Many senators, both Democrat and Republican, are Catholic and the pope can urge them to overcome their political differences by reminding them of their moral obligation to help the “least of these.”

The truth is that the pope may be the only person who can broker a bipartisan solution to inequality at the US Capitol and help low-wage workers. That’s why the pope may be our only hope.