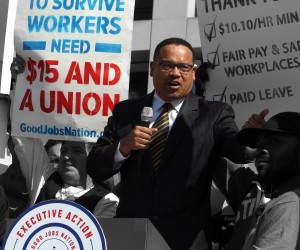 While millions of Americans are struggling to get by and sustain their families, Republicans are trying to make it easier for employers to steal their wages.

Last month during Committee consideration of the National Defense Authorization Act, Representative John Kline inserted an amendment to block the President’s Fair Pay Safe Workplaces Executive Order at the Department of Defense. This Executive Order is the result of years of advocacy by workers, labor rights activists and the Congressional Progressive Caucus. It helps ensure companies with federal contracts are following federal labor laws, like protections against wage theft and unsafe working conditions, and protecting the right for workers to organize.

There are reports of millions of dollars in stolen wages and penalties from government contractors. Now, the President’s Executive Order doesn’t punish contractors – it actually helps them follow the rules. Canceling the contract is the last resort for companies that refuse to correct their behavior. But Republicans don’t like it. Instead of helping companies who are fair to workers, they want to make it easier for companies that steal from their workers.This week, the Congressional Progressive Caucus Co-Chairs Raul Grijalva and I introduced an amendment to strike Rep. Kline’s language from the bill. But it’s no surprise that the Republican led Rules Committee rejected the amendment. They don’t want to have this debate in front of the American people. They don’t want to admit that they are standing with wage thieves and companies willing to step on working Americans and their families.

Workers aren’t the only ones who should be outraged about this. This provision actually gives a leg up to the contractors that don’t play by the rules, putting companies doing right by their workers at a disadvantage. Think about it: you’re a law-abiding company that earned your contract – now Republicans want to reward your competitors that are willing to steal from their workers?

Americans want fairness. If Republicans want to make it easier for companies to get ahead by shorting their workers, they can since they are in the majority. But they shouldn’t get to without a public debate.