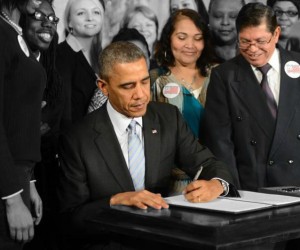 During the past 3 years, striking contract workers won 3 executive orders to raise job standards for millions of people. Now workers are calling on the next President to do More than the Minimum by signing a $15 & a Union Executive Order.

Since then, federal contract workers have gone on strike 17 times to protest poverty pay at national landmarks like the Pentagon, the U.S. Capitol, and the Smithsonian Museums.

But the fight for a Good Jobs Nation isn’t finished yet.

That’s why Good Jobs Nation workers, backed by the entire Congressional Progressive Caucus, 18 U.S. Senators and 25 National Religious Leaders, are calling on the next President to make sure every worker wins living wages and union rights.

As former NAACP president Ben Jealous wrote in CNN, “A bold pledge by the candidates to use the power of the pen to “Fight for $15 and a Union” would send workers everywhere a clear message that national change is coming.”