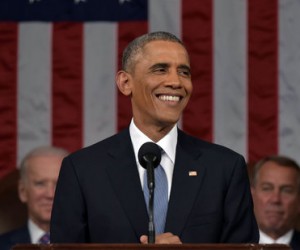 In his State of the Union address Tuesday night, President Obama called on Congress to raise the federal minimum wage, currently $7.25 an hour. But he gave no indication of how much or how soon it should go up.

At best, that leaves as a starting point the Democratic proposal from the last session of Congress, which called for a raise to $10.10 an hour, phased in over two years. That’s regrettable because $10.10 sometime in the future is too low and too slow.

Just to be in line with economic and historical markers, the minimum should be between $11 and $18 an hour today.

To reframe the minimum-wage debate around a higher figure, Mr. Obama did not have to offer his own number. He merely needed to give direction, along the lines of:

$10.10 may have seemed adequate when it was first put forward by Democrats in 2013, but that was then. It’s 2015 now and it will be 2017 or later by the time a new minimum is phased in. Congress needs to set a higher level that reflects today’s realities.

Instead he made the case that $7.25 an hour is inadequate by challenging anyone who thinks it’s satisfactory to try living on $15,000 a year, roughly the annual pay of a full time minimum wage worker.

The minimum wage is not supposed to be a poverty wage. It is supposed to be a wage floor, which ensures that even the lowest wage workers share in economic gains. In the process, it helps to protect against downward pressure on hourly rates through much of the wage scale. If the minimum wage is not adequate – as measured by gauges like productivity growth and wage-and-price inflation – it’s a good bet that average wages are also lagging. And in fact that has long been the case in the United States.

The lowest paid workers are often those with the least clout to bargain with employers for higher pay; in effect, the government is supposed to bargain for them by setting an adequate minimum wage. By letting the minimum languish, legislators become complicit in chronic low pay and widening inequality.

Republicans are generally against raising the minimum, an indefensible position that they may try to slip out of by offering a gradual raise to $9 an hour or so. Mr. Obama’s reluctance to abandon the $10.10 proposal in favor of something higher suggests that Democrats may be divided over how much to fight for. Those dynamics will keep the issue alive for political purposes, but probably won’t lead to any practical results.