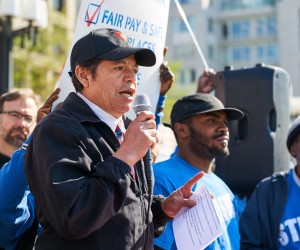 I will be among the tens of thousands of low-wage workers around the nation hitting the streets today to “Fight for $15 and a Union.” As a McDonald’s grill cook struggling to support my grandchildren on $11.76 an hour, I will demand that the CEO of McDonald’s help workers like me rise out of poverty.

But since our strike is on the same day as the Democratic debate in New York City, I will also demand that the next President — as CEO of the U.S. Government — pledge to help all workers by issuing a “$15 and a Union Executive Order.”

Even though I was a lawyer in my home country of Ecuador, it was marred by poverty, violence and political prosecution. When the opportunity presented itself to immigrate to the United States, I took it. My new country offered the promise of hope, security and medical care for my family that I was not able to provide them in Ecuador.

Unfortunately, since I began this new life in the U.S., I’ve been stuck is a series of low-wage jobs and the American Dream now seems like an illusion.

Today, I work at the McDonald’s inside the Smithsonian Air & Space Museum on the National Mall in Washington, D.C. We receive tens of thousands of visitors during the tourist season that just started, and we produce hundreds of thousands of dollars in profit for our employer. But, many of my co-workers and I are struggling to make ends meet.

Since the Smithsonian Institution is a federal agency, the President has the power to ensure that the federal government only does business with companies that pay living wages and allow us to organize.

When Uncle Sam gives taxpayer dollars to low-wage employers, according to a study by the National Employment Law Project, workers are forced to turn to government assistance — like food stamps and Section 8 — to meet their basic needs. That means profitable corporations like McDonald’s are bilking taxpayers twice — once for the cost of the contract and then again for the cost of welfare subsidies.

The U.S. Government should not be doing business with companies that exploit U.S. contract workers and that ultimately make Americans poorer. That’s simply unpatriotic.

That’s why I’ve gone on strike 17 times as part of Good Jobs Nation to call for presidential action.

I helped organize Good Jobs Nation 3 years ago and our movement has expanded to include workers who cook and clean for wealthy and powerful government officials at national landmarks like the Pentagon, U.S. Capitol, and the U.S. Senate.

Since our first strike in May 2013, we’ve won three presidential executive orders raising the minimum wage to $10.10, cracking-down on wage theft, and extending paid leave benefits for contract workers.

I was proud to stand on stage with President Obama at the White House when he signed the historic $10.10 Executive Order on February 12, 2014.

With the stroke of the pen, the President not only raised the pay of contract workers, he also sent a powerful message to all of America’s executives: Transform our low-wage economy.

Since 2014, dozens of mayors, governors and even the CEOs of major companies like The Gap, Ikea, and Wal-Mart have taken executive action to give millions of workers raises and benefits. Because the President led by example, tens of millions of workers are a step closer to realizing the American Dream.

When I was at the White House, I embraced President Obama and told him “Thank you for giving hope to workers like me.”

Today, I speak for all Good Jobs Nation contract workers who are on strike. We are calling on the next President to build on Obama’s labor legacy by issuing an executive order that rewards lucrative contracts to “model employers”. Workers on federal contracts deserve a living wage of $15 an hour, decent benefits, and a labor peace policy so workers don’t have to repeatedly strike to have our voices heard.

Low-wage contract workers are not the only ones calling on the next President to take executive action. The leaders of 25 national religious organizationsand Members of Congress recently issued statements calling for the next president to use his or her executive powers to help workers win living wages and union rights.

Tonight, after striking workers put away their picket signs, we will be watching the debates to hear which of the candidates will use executive action to help workers win the “Fight for $15 and a Union.” If the candidate want labor’s vote, they should stand with labor.

Luis Chiliquinga works at the Smithsonian Air and Space Museum McDonald’s and is a leader in the Good Jobs Nation campaign.