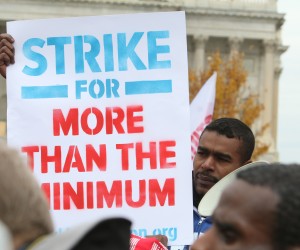 By Dave Johnson, Fellow with Campaign for America’s Future

Should our government be for good jobs with good wages and benefits — the things most of We the People want in our lives? Or should it be for bad jobs, low wages, no benefits — the very things that a wealthy few (who like to call themselves “job creators”) have become known for, just so they can pocket that pay difference for themselves?

In other words, who is our government for? The broad masses of regular, working people or a very few already-wealthy people?

President Obama has used executive orders to boost the minimum wage and raise workplace standards for employees of federal contractors.

Campaign for America’s Future, Progressive Congress, Good Jobs Nations, and a coalition of progressive organizations have released a “More Than The Minimum” plan calling on President Obama to use executive actions to make the federal government a “model employer” by further raising the minimum wage to $15 an hour with decent benefits, and giving federal contract workers the right to collectively bargain.

Join Progressive Congress, Good Jobs Nations, and a coalition of progressive organizations, calling on President Obama to use more Executive Action to help federal contract workers by raising the minimum wage to $15/hr and giving workers the right to collectively bargain.

A Strike Drives the Point Home

As Laura Clawson reported at Daily Kos, several hundred government contract workers in Washington held a strike Thursday to protest their low wages. Led by Good Jobs Nation, they are calling for a higher minimum wage and allow the workers to unionize.

Five members from the Congressional Progressive Caucus (CPC) joined government contract workers who shared their struggles to make ends meet on their hourly salaries to call for a higher minimum wage and allow the workers to unionize.

“In red states, and blue states alike, Americans voted to pass ballot measures to raise wages and improve working conditions. Brothers and sisters, our president kicked off the national movement to raise wages when he signed the executive order to raise wages for low wage workers. Before the ink on the order was dry, CEOs from companies like the GAP, IKEA and Disney followed the president’s example and raised pay for their workers. Not only that, but the mayors of cities such as New York, Chicago and Philadelphia followed the executive order to raise wages for their contract workers.”

Thomas Jones, a worker in the Capitol, said,

I’m a contract worker for the US Capitol. I cook meals for congressmen, lobbyists, and the workers upstairs. but the workers in the basement live in poverty. I’m going on six years [at this job] and struggling to get by on $12 an hour. I have a dream of getting married and raising a family. I’ve done all the right things. Mr. President, we are calling for good jobs and a union.

Rep. Keith Ellison (D-Minn.) and a member of the Congressional Progressive Caucus, said,

We need to raise the minimum wage and we need to do it now. $10.10 is not enough. Minimum wage? Do you want a minimum marriage? Do you want a minimum coat in the winter time? Would you like minimum transportation? A minimum car means you might get there, you might not. Better than nothing, but not good enough. We need a livable wage, and we need union representation, collective bargaining. Because workers need to be able to say to the people on the other side of the table ‘we are the people that keep this place clean, we keep this place safe, without us this place does not work. If the CEO does not show up, nothing happens, if we don’t show up, this place stops.”

I heard you when you said you want something better for your children. What’s wrong with that? We are standing at the Capitol, and it’s a stain on us all, the members of congress, that you do not have enough pay to meet your basic necessities, even though you work hard.

People talk about job growth. ‘Oh we have this much job growth, we have this many months of job creation.’ That’s good. I know there’s a number of jobs out there, I know people that have three of them.

This strike is fundamentally about the type of democracy that we want to have. Do we want to have an economy that the handful, the few, rake in all the wealth and leave people like Dawn struggling to keep food on the table and shelter over their heads. That’s the choice that’s in front of us, what kind of country are we going to have? Today, as taxpayers we are demanding that our taxpayer dollars go to create good jobs and help these workers live the life they are called to live.