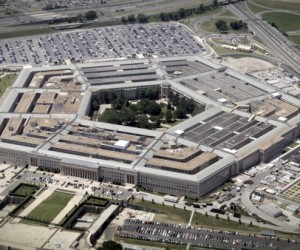 “Mr. Obama, I work hard to serve American heroes, and I shouldn’t end up with zero”

Non-union cleaning and concessions workers at the Pentagon plan to walk off the job for the first time Wednesday morning, the latest in a series of federally contracted worker strikes designed to force the president’s hand. Organizers hope dozens from the Pentagon will participate today. They’ll be joined on strike by workers from the Air and Space Museum, Ronald Reagan Building, and Union Station, government-owned buildings where workers have staged a series of past one-day work stoppages for the same purpose.

“I moved back with my parents because I couldn’t afford rent,” 52-year-old Pentagon cooking and cleaning worker Jerome Hardy told Salon in a pre-strike interview. “My teeth are decaying, my teeth are bad,” he added, but “I can’t afford to take off to get my teeth fixed.” Hardy said after eight years of work at the Pentagon, “I still make $9 an hour. Eight years, I haven’t gotten a quarter raise, a dime, a nickel, nothing. So my bills are falling behind. I need more money.”

As I’ve reported, the strike campaign by the coalition Good Jobs Nation – backed by the union federation Change to Win – aims to urge President Obama to wield executive authority to raise labor standards for those employed under federal contracts. Taxes fund around 2 million jobs that pay no more than $12 an hour, according to the progressive think tank Demos; federal contracts worth $81 billion went to companies that had collectively paid out close to $200 million in penalties and back pay, according to congressional Democrats. “Mr. Obama,” said Hardy, “I work hard to serve American heroes, and I shouldn’t end up with zero.”

The White House and the Office of Management and Budget did not respond to inquiries last week about workers’ call for executive action. Since Good Jobs Nation’s launch last May, organizers say the campaign has secured a (reportedly inconclusive) meeting with the head of the General Services Administration, spurred union recognition for about 220 museum workers, sparked a Department of Labor investigation into alleged wage theft, and largely succeeded at using community protest to reverse or avert retaliation against strikers. But the campaign so far hasn’t received any direct public response from the president.

That silence has drawn increasingly public pushback from the co-chairs of the Congressional Progressive Caucus, who are among 50 House members to write to the White House in support of the workers’ demands. In an unusual move, CPC Co-Chair Keith Ellison, D-Minn., last week questioned Obama’s Council of Economic Advisors chairman, Jason Furman, from the audience of a panel at a think tank. Asked by Ellison about prospects for progress “outside of legislative action” on behalf of contracted workers, Furman answered that, “There’s no doubt that the biggest thing we could do is something legislative,” because “the biggest question” is, “How can we make sure that there’s no one in this country that’s paid less than $10.10 an hour?” Ellison told Salon that was “the most remarkable dodge I’ve ever seen.”

Sen. Bernie Sanders offered a more optimistic assessment, telling the Washington Post’s Greg Sargent he was “very pleased” that, at a private meeting with Senate Democrats, “the president and members of his administration indicated they’re giving very serious consideration to this proposal.” Sanders said Obama “is weighing the pros and cons in terms of the impact on the overall debate.”

Hardy told Salon he’ll be watching next week’s State of the Union address in hopes of hearing a new commitment from the president. “I don’t know why he didn’t do it,” he said. “But … I think he’ll change his mind. I think he will.”