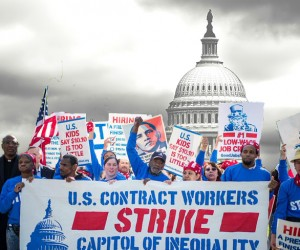 The same day 800,000 federal employees missed their first paycheck because of the longest government shutdown in American history, Congress passed a bill guaranteeing them backpay when they — eventually —  return to work.

Missing from this legislation was any help for the contract workers that the federal government relies upon to provide for goods and services, from office cleaning to space probes.  As agencies run out of money, contract payments stop and contracting firms have to furlough workers without pay. And, if past experience is anything to go by, unlike direct federal employees, contract workers will not get a cent in backpay when the shutdown ends.

To add insult to injury, the federal government doesn’t even keep track of how many contract workers suffer in this way — either in this or past shutdowns.  Inspired by the old business adage that “what’s measured is managed” we’ve tried to fill this gap by estimating the number of contract workers impacted by the current shutdown, which industries they work in, and how many of them make poverty wages.

Our starting point was data reported on federal contracting published in the government website usaspending.gov.  We found that in the 2018 Financial Year the nine government departments plus other smaller agencies whose FY 2019 appropriations bills had not passed by the time of the shutdown, spent $168 billion in domestically sourced contracts – just under one third of total federal contracting for the year. DHS and NASA accounted for almost half of contract spending by unfunded agencies.

We then estimated the number of full-time equivalent workers employed on these contracts by dividing the value of contracts within each major industry by the dollar receipts per employee for that industry published by the U.S. Economic Census. Adding 6,637 for the janitors employed on GSA leased buildings, and 10,000 workers for employees on National Parks concessions in low season (see Methodology Appendix of our 2018 report on the low-wage federal contract workforce) generated a total of 1,039,000 FTEs. This figure represents almost half — 46% of total federal contracting employment, and more than 200,000 workers above the number of impacted direct federal employees.

Finally, we estimated the number of impacted contracted workers paid a poverty wage, taking $15 per hour as our benchmark, using figures on the distribution of hourly wage rates by industry published by the Bureau of Labor Statistics, Occupational Employment and Wage Estimates. We found that 335,388 FTEs, or 33% of the total impacted workforce, were paid less that $15 per hour, with almost half of these in the Administrative Services Sector, which includes janitors and security guards.

At this stage in the shutdown it is unlikely that all these workers have yet been furloughed. Some contracts can be paid from previously appropriated funds, and major contracting firms have the incentive and resources to keep paying high skill workers on stopped contracts or to transfer them to other work. But the workers who can least afford a layoff — for instance building service workers employed by small businesses — are the most likely to be laid off and, the longer the shutdown goes on, the more of them will be.

Worst of all, these workers seem to be invisible.