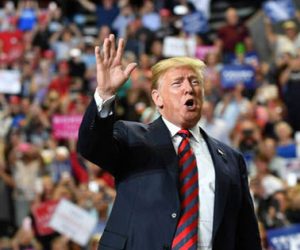 President Trump rallied the faithful at Wheeling, West Virginia last weekend, as part of his pre-midterm campaign blitz. Workers from Good Jobs Nation were there to hear his latest report on his promise to deliver “more jobs, better wages” to working Americans — and to make their own minds up about whether he’s followed through.

Well nationally, Trump is correct that the economy is growing, and official poverty and unemployment rates are falling. But as many commentators have pointed out, these trends simply continue those long under way during Obama. Meanwhile, real wage growth is so anemic that Trump’s White House is trying to change the way it’s measured. The only area of the economy that has really boomed under — and because of — Trump are post-tax corporate profits, which thanks to his tax cuts have jumped 14.5 percent.

As for West Virginia, which gave Trump the second highest margin of victory in the country in 2016, the economic picture looks far worse.  West Virginia remains the 3rd poorest state in the nation by GDP per head, and last year it was one of only two states where poverty rates increased. When Trump took office the unemployment rate in West Virginia was just 0.6 percent above the national average. But now that gap has more than doubled to 1.4 %. In fact the state unemployment rate hasn’t budged under President Trump, even as it has declined nationally. And worst of all, at 54 percent, West Virginia’s labor force participation rate remains lowest in the nation.

West Virginia is also Trump’s favorite place to tout the comeback of the coal industry, but nationally coal mining has added only 2,000 jobs since he took office, and the state’s mining and forestry sector combined added only 900 jobs, or 4 percent.

To put these numbers in perspective, consider that over the same period American corporations have offshored over 150,000 jobs, including more than 13,000 by large federal contractors while Trump’s administration awarded them over $50 billion in taxpayer-funded contracts.  And in West Virginia, one federal contractor alone, Mylan Pharmaceuticals, just sent over 500 good paying union jobs from Morgantown to India and Australia.  White coats may be less photogenic at campaign rallies than hard hats, but these are still jobs that West Virginia cannot afford to lose.