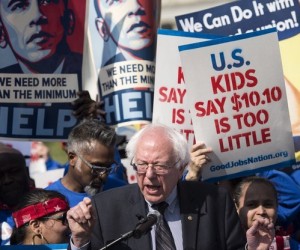 “Speaking before hundreds of striking federal contract workers outside the Capitol, Senator Bernie Sanders of Vermont unveiled legislation Wednesday that would raise the national minimum wage to $15 an hour. Mr. Sanders, who is seeking the Democratic nomination for president, and other members of the Congressional Progressive Caucus at the rally also pressed President Obama to take executive action that would give preference in awarding federal contractors to companies that pay at least $15 an hour and give their workers the right to unionize.  Today, we send a very loud and clear message to the United States Congress, to the president of the United States and to corporate America,” Mr. Sanders said. “In the richest country on the face of the earth, no one who works 40 hours a week should be living in poverty.”