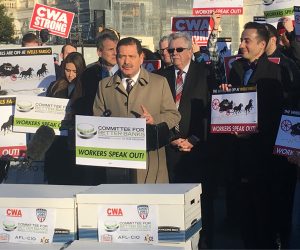 Not much has changed for workers at Wells Fargo since the bank’s 2016 fake accounts scandal revealed a toxic culture in which workers were forced to use high-pressure sales tactics to push products and increase sales volume. Despite an aggressive marketing campaign that suggests this culture has been upended, Wells Fargo workers attest that old sales goals have merely been replaced by pressures and incentives to meet unrealistic quotas – with major impacts on compensation, mobility and job security.

“Honestly, it’s perceived as a joke — ‘oh yeah, they’ve changed things.’ I haven’t met anybody, personally, who believes what they’re saying or that it’s the case,” said Meggan Halvorson, 35, who works in Wells Fargo’s private mortgage banking division in Minneapolis as reported by the LA Times.

That’s why Halvorson and other Wells Fargo workers arrived on Capitol Hill today to demand that Wells Fargo CEO Tim Sloan, who is appearing before the House Financial Services Committee, hear their stories and enact real change.

At a press conference outside the capitol before the hearing, U.S. Rep. Chuy Garcia (D-IL) joined workers to release a report by the Committee for Better Banks — a group made-up of current and former Wells Fargo frontline workers, as well as consumer advocacy groups and labor organizations — that shows that Wells Fargo has yet to reform practices that hurt workers and consumers.

The report shows that new forms of pressure are most acute in Wells Fargo’s retail banking division, where incentives and bonuses based on “engaging” customers in conversations — with the intention selling of products — have come to dominate the work environment in branches and contact centers. Tellers are constantly encouraged and even electronically prompted to generate leads and pass on sales opportunities to other bank workers, including during routine bank transactions. In contact centers, pressures are even more severe. In one debt-collection center, illogical and physically unreachable expectations for call volume (up to 375 per day) and dollars collected have led to an environment of pervasive stress and fear.

Other findings of the report include:

Sloan, who has come under increasing fire for the lack of significant reform at the bank, is appearing before the House Financial Services Committee to answer questions about the bank’s recent scandals.

Wells Fargo and its executives have engaged in a year-long public relations campaign, asserting the bank has “re-established,” with the express aim of earning the trust of consumers. Many elected officials have called for more concrete demonstrations of change, including more accountability from Wells Fargo executives. Others have called for Sloan to be replaced.

It is widely expected that the committee will push Sloan to articulate just what has changed at the bank, including offering clear evidence that sales goals and pressures are no longer in place.