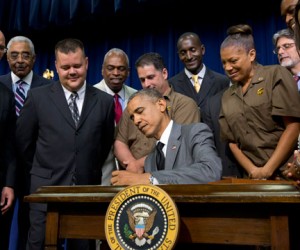 In May 2013, workers employed by private companies under contract with the federal government came together to form Good Jobs Nation – and walked out on strike in the nation’s capital.

Hundreds of workers flooded the streets of D.C. that day and for 17 more strikes in the years since. They stood up on behalf of nearly 2 million more workers who — as my Demos colleague Robert Hiltonsmith and I found in our research — were paid $12 an hour or less to work on behalf of the American people, employed by private companies through contracts, grants, loans, concession agreements and property leases with the federal government. At the same time, many of these same companies provided their executives with exorbitant compensation on the taxpayer dime. Even as President Obama and a growing number of economic analysts were identifying the loss of stable, middle-class jobs as a top national concern, U.S. tax dollars were effectively fueling the low-wage economy and exacerbating inequality.

Of course, workers employed on federal contracts represent just a portion of the U.S. workforce that is underpaid and overworked, working without paid sick time or a voice on the job, and often laboring under hazardous conditions. But while Congress blocked efforts to raise the minimum wage and advance workplace fairness for all Americans, Obama used his executive power to improve standards for one group of workers he could affect directly: federal contract employees. Less than a year after contract workers first walked off the job on strike, the president announced in his State of the Union address that he would raise the minimum wage for contract employees to $10.10 an hour. More executive orders followed: Obama guaranteed paid sick time to contract workers, cracked down on federal contractors who flout federal wage and safety laws, extended contract workers’  protection from discrimination, and acted to advance equal pay in the contracting workforce.

The president’s executive actions are important because they directly improve the lives of Americans working for federal contractors and establish a model for Congress to follow in improving wages and employment conditions for all working Americans. And just as Obama’s executive orders for federal contract workers built on a long history of ensuring our tax dollars provide decent jobs with fair hiring, the next president will have the opportunity to build on Obama’s efforts.

Workers across the country have taken to the streets to call for $15 an hour and union rights. While congressional action is still required to make that a reality throughout our economy, the next president can expand on Obama’s efforts for contract workers by signing a Model Employer Executive Order, establishing a federal contracting preference for employers that provide their workers with good wages, good benefits, and the right to form unions without employer intimidation or interference. He or she could also establish a White House Office of Good Jobs to coordinate executive agencies so that all procurement, grant-making and regulatory decisions of the federal government support well-paid jobs, workers’ rights and responsible employment practices.

The gains achieved by Washington-area contract employees who walked out on strike three years ago are nothing short of amazing: helping to move the president of the United States to act, not once but with a string of executive orders that not only improved their own jobs but raised standards for contract workers across the country. At the same time, the courage of striking contract workers contributed to an atmosphere where working people in all sectors of the economy were emboldened to speak out for better pay and working conditions. Now it’s up to the next Congress and the next president to heed their voices and take the next steps toward becoming a nation that truly invests in good jobs.

Amy Traub is a senior policy analyst at Dēmos and the co-author of “Underwriting Bad Jobs: How Our Tax Dollars Are Funding Low-Wage Work and Fueling Inequality.”