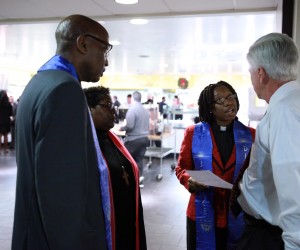 As America’s lawmakers plan to take time off to enjoy the holidays with their families, we, along with the leaders of other national faith organizations, are committed to remain vigilant of the needs of those they leave behind in Washington, D.C. – the low-wage workers who clean their office buildings and cook their meals.

These contract workers – who labor diligently inside the U.S. Capitol and Senate – will not get paid time-off to celebrate the holidays with their families.   Scores of these workers will be relying on food stamps to prepare their holiday meals and using Section 8 vouchers to avoid spending Christmas Eve on the streets.

Interestingly, on Dec. 6, our nation marked the 150th anniversary of the ratification of the 13th Amendment, which abolished slavery. Ironically, a significant number of today’s federal contract workers find themselves having to fight to put an end to the financial bondage they are experiencing as a direct result of the low-wages they are receiving, along with the lack of benefits.

During the past year, we have accompanied these federal contract workers as they walked-off their jobs five times to strike for fair and just employment compensation and conditions.

These fighters for “$15 & a Union” include women like Sontia Bailey, who begins each day working a full-time shift at the U.S. Capitol before making her way to her second job at a fast food restaurant.  Working 70 hours a week to pay the bills puts enormous stress on her body – she recently suffered a miscarriage.   To add insult to injury, Sonita and her fiancé could not  afford to take time to grieve the loss of their child as Sontia had to return to work two days later in order to try to remain current on her bills.

With the holidays upon us, how should we respond to such suffering in our midst?

The scripture reading that leads us into the holiday season shines a light on the answer.   In Luke 3:7-18, John the Baptist, foretelling Christ’s birth, urges the powerful and privileged to repent from exploiting the people.   The crowd asks him “What then should we do,” how shall we repair and rectify this exploitation?  John replies, “Whoever has two coats must share with anyone who has none; and whoever has food must do likewise.” (Luke 3: 10-12)

John’s message is clear:  We must resist greed and share what we have with those who go without the basic necessities of life.

Regardless of the holiday messages that flow from Madison Avenue, the most authentic acts of this season involve doing justice and sharing with those in need.

Acts that are rooted in justice and grounded in sharing serve as good news for impoverished federal contract workers, particularly as they work amid the affluence of wealthy and powerful U.S. senators, and are employed by the Compass Group, a multi-billion dollar multi-national corporation.

This holiday season we are sending a letter to the CEO of Compass Group asking him to give Sontia and her co-workers the gift of justice.  We are asking that Sontia and all federal contract employees be given an hourly wage of $15 along with fair working conditions and the right to engage in collective bargaining.  As faith leaders, we offer ourselves to serve as mediators who can bring workers and management together to achieve labor peace and fairness.

We know that a majority of the workers have signed cards indicating that they want to form a union and address workplace grievances without resorting to strikes.   Additionally, we know that company executives and many lawmakers share the desire for workplace harmony at the U.S. Capitol.

By working together, we can bear witness to the true spirit of the holiday season.